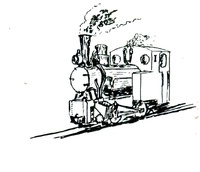 American electric locomotives at Balatoc Mining Co (BMC)
Balatoc Gold Mine, Baguio (Benguet), Luzon — 610 mm gauge - This gold mine was electrified in the 1930s using overhead wire electric locomotives supplied by General Electric USA using five 3.6 tonne Model Type LME-2T4-A8 and LME-2T4-E5, and also one 5.4 tonne Model Type LME-2T6-G which is #23 illustrated here. In the 1990s, one of the LME-2T4-A8 electric locomotives, which had one-piece cast steel frames, #21 had been converted with a diesel engine to power the tourist train, which was at that time able to take people part of the way into the mine. The remains of this conversion, now obviously out-of-service, can be seen under the guise of "God Bless Us". No data on the other diesel locomotives (quantity 2?), however the engine hood shown on the ground looks to be of 1950's origin, perhaps Japanese. The diesel motors are valuable commodities, and seem to have been traded off for other items?

Interesting information! As a former US colony they used US locos, that makes sense.
Thank you!

American electric locomotives at Balatoc Mining Co (BMC)
There are some photos taken in 2004 of the tourist train in operation at Baguio. The locomotive #21 is shown.